This comical adaptation of "PUSS IN BOOTS" stays true to the ideas of the classic TAIL, with plenty of new laughs for the whole family!

Filled with AUDIENCE PARTICIPATION, young play-goers help defeat the town ogre before a poor miller's son can marry his princess — all masterminded by a talking cat, of course!

Geared for ages 3 and up, from the producer that brought you "Cinderella", "Snow White", "Brothers Grimm", and "Ming Lee and The Magic Tree". 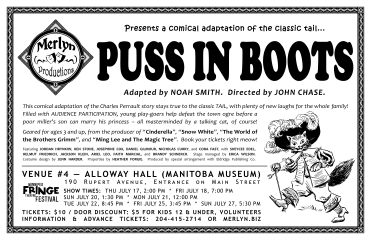 Puss in Boots, by Noah Smith

DRAMA SHOWCASE
has been postponed until a later date (TBA).
Subscribe Now!